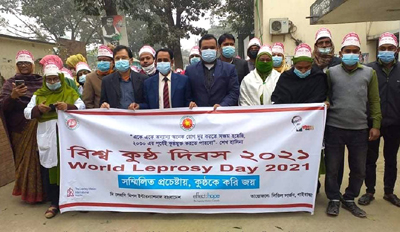 World Leprosy Day-2020 was celebrated in the district yesterday with a call to eradicate the Leprosy disease from the district and the country by 2030.

Besides a discussion meeting on the importance of the day was also held at the conference room of CS office on Sunday with CS Dr. AM Akhtaruzzman in the chair. The meeting was also addressed among others by junior consultant of chest diseases clinics(CDC) Dr. Nazmul Huda, Medical officer of TB and leprosy of CS office Dr. Md. Shariful Islam, technical support officer of PROYASH project of TLMIB Keshob Chandra Roy and Area development officer of the project of Mobilization and Empowerment of People living with Disabilities.

The speakers in their speeches underscored the need for creating much awareness among the people about leprosy, finding out the leprosy patients and then bringing them under free treatment facilities to build a leprosy free society.

Junior consultant of chest diseases clinics(CDC) Dr. Nazmul Huda made a welcome speech and gave a scenario of leprosy diseases in the district. Dr. Nazmul said, a total of 193 leprosy patients had been detected from the district in 2020 and all of them had been cured from the diseases through taking medicine and advices properly from the physicians.

Medical officer of TB and leprosy of CS office Dr. Md. Shariful Islam in his speeches emphasized the need for early case detection to save the leprosy affected patients from various disabilities.

CS Dr. AM Akhtaruzzman in his concluding speeches said, leprosy is not a curse and it is like any other diseases and at present, leprosy has become a completely curable disease in all stages if the patients are taken under proper and regular treatment programme.

The loss of touch, pain and temperature sensations in the skin, loss of movement or paralysis of the muscles and loss of sweating and absence of itching are the early signs of leprosy which mainly spreads through the air, he added.

CS Dr. AM Akhtaruzzaman urged the health officials and employees to be more serious and professional to detect the leprosy patients in the society through strengthening their searching activities to attain the cherished goals of the government led by Prime Minister Sheikh Hasina.

The CS also underscored the need for achieving the sustainable development goals of the government by 2030 declared by the UNDP through eradicating leprosy from the society.

Apart from it, leprosy disease detecting campaigns by the community base organizations formed by the leprosy patients were also held at other six upazilas of the district marking the day under the project of Mobilization and Empowerment of People with Disabilities of TLMIB, said area development officer Shariful Islam.

A large number of health officials and staff, NGO activists and project staff, leprosy beneficiaries including journalists took part in the programmes spontaneously.