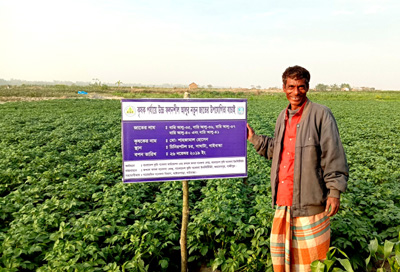 GAIBANDHA : Crops of BARI (Bangladesh Agricultural Research Institute) released improved varieties which farmed on the char land by the farmers of chars and river basin areas of five upazilas the district grew well during the current season resulting the farmers are expecting desired output against the crops.

Official sources said, BARI has set up an office in the name of On Farm Research Division in the district town in 2016-2017 fiscal year.

After setting up the office here the officials and field level staffs led by principal scientific officer Dr. Abdullah Al Mahmud started motivating the farmers of chars and river basin people of Shaghata, Fulchhari, Sadar, Sundarganj and Gobindaganj upazilas of the district to farm various improved crops released by BARI aimed at getting desired output and expected economic profit against the crop.

In response the char and river basin farmers of the upazilas farmed 15 kinds of improved variety released by BARI on their char land and got desired yield and earned expected economic profit by selling the varieties to the local markets. For getting desired output and earning expected economical profit from the crops the other farmers visited the crop land and expressed their willing to farm the varieties on their char land also in place of local ones. In this way, the number of farmers are increasing gradually.

During the current season, a total of 1000 farmers of chars and river basin areas farmed various types of improved crops including cereal crops vegetable crops and tuber crops released by BARI on their char land with the hopes of getting desired output against the crops.

A number of farmers have started the harvest a few of the crops like sweet gourd and brinjal but full harvest will start in the month of February and it would continue till last week of March, said Dr. Abdullah Al Mamud.

Technological supports to farm the crops successfully were also provided to farmers by the field staff of the BARI office here, he also said. The farmers are happy to see the crop lands which are giving them beckoning of bumper production of crops, said Shahjamal Hossain a char farmer of Chinir Patol char under Shaghata upazila.

Abdul Gafur, chairman of fulchhari union parishad said, the quality of the crops produced by the selected farmers of the BARI office here is better than the local crops. As a result, the farmers earn much economic profit by selling the produces consequently the farmers are showing their more interest to farm the BARI released improved varieties on their char land, he also said.

Md. Reazul Haque a farmer of Goghat area under Kamarjani union of Sadar upazila said, he farmed BARI released improved potato variety on a bigha of land last season and got unexpected yield against the tuber crop and earned much money by selling the variety in local markets.

As the farmers are getting expected crops and earning economic profits from the farming of the crops taking the suggestions and advises from the officials of BARI office here many farmers demanded of the concerned authorities through this correspondent to set up a BARI office in Gaibandha district permanently considering the interest of the farmers who are residing in chars and river basin areas of the upazilas as early as possible to help achieve the sustainable food security of the government led by Prime Minister Sheikh Hasina.

Talking to the Daily Asia principal scientific officer of On Farm Research Division of BARI here Dr. Abdullah Al Mahmud said, a total of 2000 hectares of char land were brought under the crops farming during the current season.

The scenario of the crops field on the char lands has taken a new and attractive look as a result the growers are so much satisfied and delighted to see the crops fields that have brought smiles on the faces of the farmers, he added.

the farmers are nurturing the crops field as per the advices of the staff of BARI local office in the district town to boost production of crops, he concluded.

Deputy director of the department of agricultural extension agriculturist Masudur Rahman said they were also motivating the farmers of chars and river basin areas of the district so that the vast tracts of char land of Shaghata, Fulchhari, Sadar and Sundaganj upazilas were brought under various cereal crops, tuber crops, oil seed crops and vegetable crops farming applying modern agri methods to get desired yield against the crops to help the farmers earn economic profit to change their lots and help the government achieve food security as well.