Candidates boycotted the polls in Satkhira 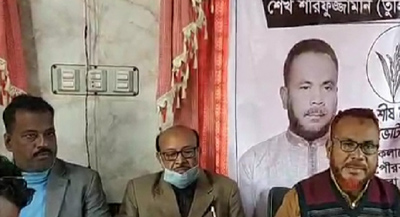 Sharifuzzaman Tuhin, the BNP-nominated candidate for the post of mayor of Satkhira’s Kalaroa municipality, has announced to boycott the polls, alleging obstruction of voters and expulsion of agents. He made the allegations at a press conference on Saturday (January 30th) at around 11:30 am, boycotting the polls and demanding re-election.

Sharifuzzaman Tuhin complained that he was barred from entering centers 3 and 8. Even outside unknown youths have assaulted him. The same allegation was leveled against the Punjabi and ostrich symbol candidates of GKMK Pilot High School Center. Their allegation is that the people of the Dalim symbol candidate are obstructing the voting. So those two councilor candidates have also boycotted the vote.

Meanwhile, another BNP rebel candidate, Nargis Sultana, alleged widespread irregularities in the vote, saying her agent from any center could not enter. As a result, he also announced to boycott the vote at his residence around 11 am on the charge of vote rigging.

However, District Election and Returning Officer Nazmul Kabir said he had not received any serious allegations of vote irregularities or any candidate had informed him in writing. Moreover, no agent went to him. Agents also did not complain to him.

He said 21,000 voters will exercise their voting right in 9 centers of Kalaroa municipality. Each center has a law enforcement force including a magistrate.

Meanwhile, voting in the Kalaroa municipality of Satkhira started in a peaceful atmosphere from 8 am. There is widespread enthusiasm among ordinary voters. Voters lined up at different centers in Gopinathpur, Tulsidanga, Murarikathi, GKMK Pilot High School and other polling stations in Kalaroa Municipality.

Incidentally, Sajedur Rahman Khan Chowdhury Majnu and Akhtarul Islam, two of the five independent candidates for the post of mayor, had earlier withdrawn from the election.

Police recovered a motorcycle with 15 kg of cannabis in Sherpur

Improving nutrition status for all people of the country underscored

Police recovered a motorcycle with 15 kg of cannabis in Sherpur

Improving nutrition status for all people of the country underscored

PUST examination notice Fill up from a year ago and the test will be at night!