Actor Masum Aziz laid to rest at his birthplace in Pabna 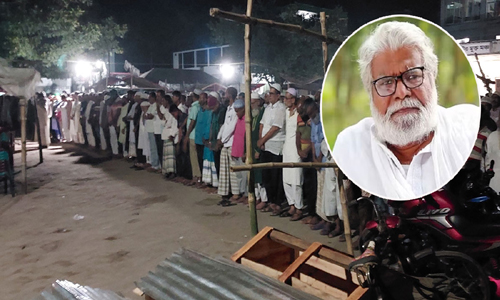 Ekushey medalist actor Masum Aziz was laid to rest in his birthplace of Faridpurupazilain  Pabna with the respect and love of people from all walks of life. 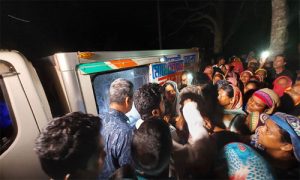 There people from all walks of life paid their respects by offering wreaths to the body of Masum Aziz. After the funeral at 8:30 pm, he was buried in Faridpur Municipal Central Cemetery as per his wish.

Earlier at around 3pm on the day of Tuesday relatives left for Faridpur with Masum Aziz’s body via Aricha-Kazirhat waterway.

Local residents said that Masum Aziz united the youth through cultural movement in Faridpur in favor of liberation war in 1971. People of this country lost a patriot in his death. His emptiness cannot be filled. Masum Aziz’s soul will rest in peace if he can hold his thoughts, spirit and ideals.

According to family sources, Masum Aziz was suffering from heart problems along with cancer for a long time. In 2017, he was diagnosed with four blocks in his heart. Then he underwent surgery. He was taken to Square Hospital on life support as his physical condition deteriorated last Thursday morning. He breathed his last there on Monday at around 2:45pm.

Apart from being an actor, Masum Aziz was also known as a screenwriter and dramatist. While studying at Chittagong University, he made his acting debut through theater work. In 1985, he acted in his first TV drama. He has acted in more than four hundred plays in his long career including Humayun Ahmed’s ‘UdeJayeBakpakshi’, SalauddinLovelu’s ‘Tin Gada’. Masum Aziz won the National Film Award jointly with Raisul Islam Asad as the best supporting actor in 2006 for his performance in the film ‘Ghani’. This year (2022) he won the EkusheyPadak for acting. He was father of one son and one daughter.