The 6th death anniversary of Poet Sayed Samsul Haque observed in Kurigram with due respect. People of all walks of lives pay respect in the grave of the poet and prayed for the poet.

People of all walks of lives including district administration and police administration pay respect placing floral wreath in the grave of the poet, situates by the western side of Kurigram Govt. College ground at 10.00 am on Tuesday (September 27). 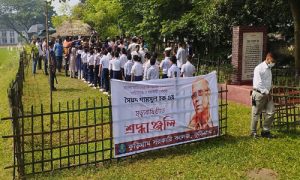 The son of the poet second Sayed Haque said the project to construct the grave of my father and a complex is in pending. He wanted to implementation of the project rapidly.

Public Prosecutor (PP) and Ekushey Medel awarer Advocate Abraham Lincoln  informed that after completing the construction of the grave of the country famous poet as well as complex, research will be held here about his literature, poems and others. The learners from various parts of the country including northern region will come here and learn about his poems, writings and others.

He died in United Hospital in Dhaka on September 27, 2016. His body was brought to Kurigram from Dhaka by Helicopter and was buried in the western side of Kurigram Govt. College ground as per his will.

The poet Sayed Samsul Haque was born in his father’s house at Thanapara in Kurigram town on December 27, 1935. He was the first son of all the eight sons of his parents. His father Sayed Siddique Hossain was an eminent Homeopathic doctor and mother Halima Khatun was house wife. He wrote in every side in Bangla Literature causes he was called as “ Sobbo Sasi writer”

He awarded Bangla Academy prize in 1964 at the age of 29. In addition, he awarded Ekusey Padak and Independence padak.