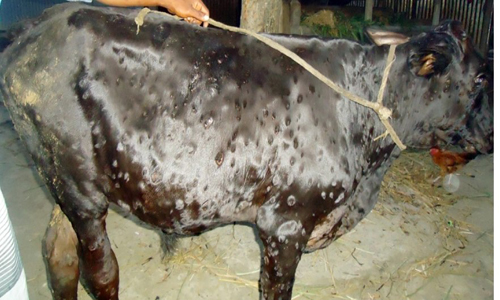 Panic prevails among the farmers as 5 cows have died and at least 2 thousand 735 cows already affected due to the spread of cow ‘lumpy skin’ disease in Santhiaupazila of Pabna. As the number of cows infected with this disease is increasing and the vaccine is not available as required, panic has arisen among the cow farmers.

Animal resource officials said that due to the spread of the disease, they are providing medical services to the farmers at the village level as much as possible.

According to the upazila animal resources office, a total number of cows in the upazila is 1 lakh 36 thousand 766. Among them 2 thousand 735 cows are affected with lumpy skin disease in last two weeks.

Farmer Salim Reza of Gauri village of SanthiaUpazila said, “Almost all the cows in the village are affected by this disease. I am very worried about the cows. The doctors of the animal hospital are not available on time, so they are forced to go to the rural doctors.

Hasan Ali of Kalaira village of Santhiamunicipality said, ‘I was in a panic as my cow was infected with this disease, when the cow will die. That’s why I sold a cow to the butcher Tk15 thousand only, which was worth about Tk90 thousand.

Farmer Sher Ali of the same village said, “4 out of my 9 cows are infected with this disease.” AboutTk 2,000 to Tk 2,500 are being spent to treat cows every day.

Ziarul, an auto-rickshaw driver of Charmachkhali village, said, “I was buying a cow with great difficulty four months ago. But my cow, worth Tk one lakh, died due to a new disease.

JitenHaldarfrom Gopinathpur village of Santhia municipality said, “I have two cows. A few days ago, a bull worth about Tk I lakh died of this disease.’

A cow belonging to Chand Ali of the same village died of lumpy skin eight days ago. Besides, a bull belonging to Mozahar Ali Biswas of SanthiaFakirparaMohalla died of the same disease last week.

In this regard, SanthiaUpazila Sub-Assistant animal resources officer (Extension) ShahjahanKabirsaid that “As the disease has spread in this area, we are treating the cows of the farmers as best we can at the field level.”

SanthiaUpazila Animal Resources Officer (Acting) Veterinary Surgeon Dr. FaruqueMia said  the office is giving advice to farmers and treating affected cows. There is no specific vaccine or treatment for this viral disease. So alternative vaccines are being used. It is getting benefits, this doctor added.