Poultry and cow farmstorched, fish damaged by poisoning over a murder in Pabna 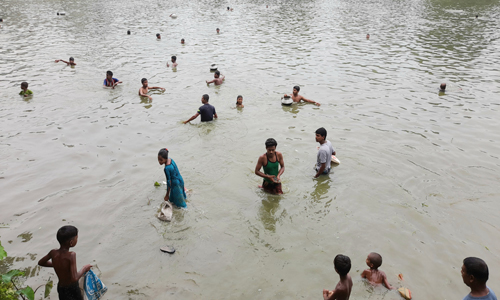 After a murder, there had been allegations against opposition rival poisoning fish ponds, setting fire to poultry and cattle farms, the loss of which was about Tk 50 thousand, according to the victims.

According to the police, eyewitnesses and local sources, one Ershad Sheikh,32 was shot dead in a clash between the supporters of Akkas Ali Biswas and Mokai Sheikh in a village of Sujanagarupazila in Pabna over goats eating the crops.

Following the case, police arrested three accused, including Azam Ali Biswas, former president of the upazila BNP. At that time, seized a licensed double gun and 49 cartridges after the slain’s father filed a murder case with the Sujanagar police station.

Eyewitnesses said that on the night of the incident, the opponents set fire to the poultry farm and cow farm of BNP leader and former chairman Azam Ali Biswas. Chickens and cows were burnt to ashes. Next day they poisoned the pond and killed about 50 moned fish.

Officer-in-chaarge of Sujanagar police station, Abdul Hannan admitted that the incident of setting fire to the poultry and cow farms, along with poisoning the pond, said that legal action will be taken if a complaint is received in this regard.