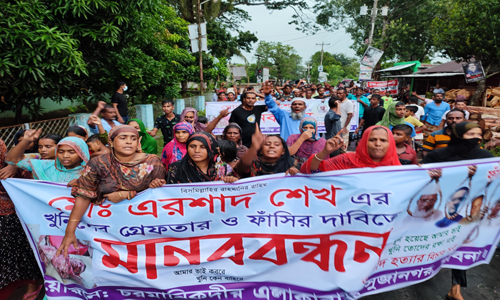 A case filed against 17 people over Sujanagar killing incident on Monday. Police arrested three people and seized the licensed weapon.

The arrested are Azam Ali Biswas,75, father of attacker Halim Biswas and former president of Upazila BNP and two others Rafiq Biswas,50, and Mamun Biswas,25.

Meanwhile, the relatives of the deceased and the local residents brought out a protest procession on Monday afternoon demanding justice for the murder and the hanging of those involved.

Relatives of the deceased Ershad said that on Sunday afternoon, the women of the two families quarreled and pushed each other over the grazing of Akkas Biswas’s goats on Golap Sheikh’s land. Akkas Biswas first thrashed Golap Sheikh’s men. From there, arguments and clashes started between the men.

“After the murder, the licensed gun of Azam Biswas was seized from his house. However, the ballistic report of the bullet is being examined to see if this weapon was used in the murder.”