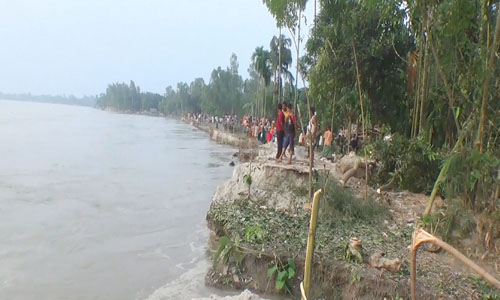 The mighty Teesta River is eroding at Bazra union of Ulipur upazila in Kurigram for the last few days engulfing about two hundred fifty houses and other establishments.

Meanwhile, cultivable lands of 500 bighas, community clinic, two mosques, a temple, Eidgah ground, Bazra Pachchim para Dakhil Madrasha, Old Bazra Bazar and a non govt. primary school have gone in the River bed. The River erosion hit victims have taken shelter here and there and they are passing their days under the open sky in sub human condition. Upazila administration and Public representatives are not helping them, local people regretted.

Superintendent of Bazra Pachchim para Dakhil Madrasha Moulovi Rafakat Hossain said we have been conducting the Madrasha for the last twenty years. The river engulfed major portion of the Madrasha in this year and the rest portion is being removed to safer place.

Mozammel Haque 65 of village Kalpani Bazra said we are poor and we have no place causing we are staying in the field under the open sky and burst into tears.

Ulipur UNO Bipul Kumar said the concerned UP chairman and UP members are ordered to prepare a list of victims within a short time. Assistance will be given after getting the list.