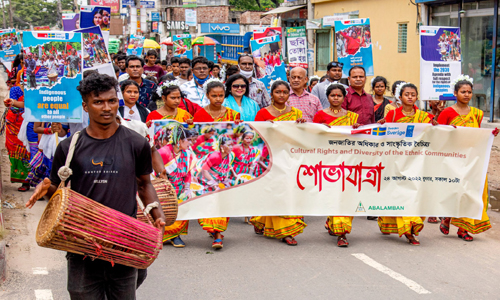 People of Santal Community, chalkedout various programmes in the district on Wednesday demanding the protection of their language, heritage and culture.

In the morning around 11 AM, a shovajatrawas brought out from the auditorium of ZilaShilpakala Academy and ended at the same venue after parading the main roads of the town.

Then, a discussion meeting was held at the auditorium of the academy with executive director of Abolamban, ProbirChakrabartee in the chair.

The speakers in their speeches said 40 lakh tribal people live in the country and many of them live in the plaine land and use around 50 languages to express their feelings.

The language-literature-culture of the indigenous people was almost endangered today due to the neglect of the main community and the lack of state initiative, they also said

Some have already disappeared so far, they added.

In this context, they demanded of the government to take necessary step to protect the language, heritage and culture of the indigenous people including santal community to build a disparity free nation.

Additional deputy commissioner-General Shusanto Kumar Mahato in his speeches said the government is so much cordial and active for overall development of the indigenous people of the country.

Taking this view, the district administration is constructing cultural academy at Katabar, the santal habituated area of the district to protect their language, heritage and culture, he concluded.

Later, a colorful cultural function was also held to entertain the participants.

A large number of santal men wearing their traditional dress participated in the programs.