If opposition joins movement, we will have a ‘counter movement’: AM 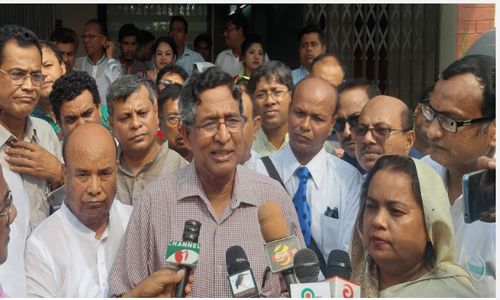 Agriculture minister Md. Abdur Razzak on Thursday said, according to the constitution, the next election will be held under the Election Commission. He has warned of a counter movement against those who are threatening the movement.

Responding to a question from reporters, Abdur Razzak said, “Opposition parties are threatening the movement. They make such threats from time to time. After this upcoming Eid, after the next puja, they do this from time to time. We have soil under our feet. We have people with us. Together with these people, we will go against those who are threatening the movement. ‘

Regarding the rice market, the Agriculture Minister said, “When the price of wheat rises in the international arena, there will be an impact on rice as well.” That is why many unscrupulous traders are stockpiling rice. Recently, 5,000 metric tonns of rice was found in a godown.

Responding to another question from reporters about the laboratory in Ishwardi, the capital of litchi, the agriculture minister said, “We have taken many initiatives not only for litchi, but also for litchi, guava, big and mango, you can see in the future.” I am coming for these. And the Prime Minister will be able to speak well about the opening of Ishwardi airport. ‘

Earlier, he visited a litchi orchard in Naodapara village of Dashuria in Ishwardi around 1.30 pm. At around 3 pm, BSRI inaugurated the litchi fair at the school grounds and visited the fair stall. He later addressed the inaugural function as the chief guest.