Thrust for standing beside the persons with disabilities with positive attitude 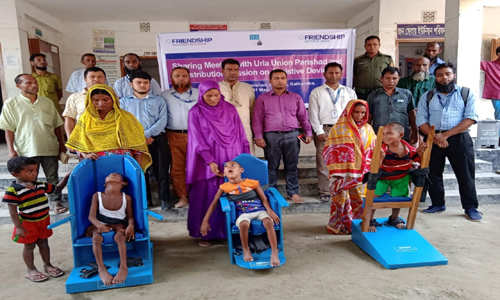 Speakers in a function underscored the need for standing beside the persons with disabilities with positive attitude to help them rehabilitate in the society.

“As the persons with the disabilities are the integral parts of the society, it is our foremost duty to assist them to rehabilitate them in the society”, they said.

They made the comments while they were addressing a view sharing meeting held at the hall room of Urya Union Parishad under Fulchhariupazila in the district on Tuesday afternoon.

Friendship, a national leading non-government organization of the country, organized the function under the project of Persons With Disabilities funded by InekeFeitzStichting , Friendship Netherlands.

Fulchhari UNO Mohammad Alauddin attended the function and addressed it as the chief guest ansupazila social services officer Razib Ahmed was present at the event as the special guest.

UNO Mohammad Alauddin in his speeches thanked the Friendship and its officials for conducting the welfare works for the persons with disabilities to build a peaceful society.

Earlier, the overall activities of the project were presented in the function through multimedia projector.

Later, assistive devices were distributed to a number of persons with disabilities free of cost at the arrangement of the organization.

A large number of people including NGO activists, social workers, public representatives, local elite and media men were present on the occasion.