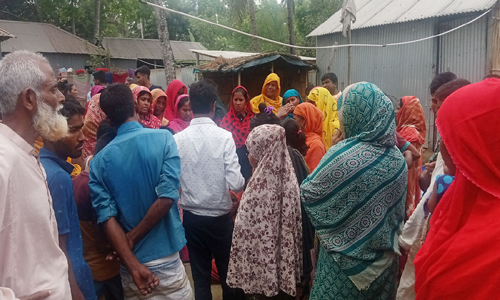 A young farmer hacked to death by his rivals of Santhia upazila in Pabna early Monday. The deceased was identified as Ruhul Amin, 32, son of Akmal Hossain of Swargram under Ataikula police station in Santhia upazila of the district.

The incident took place around 11 pm on Sunday and died at hospital at around 1.00am on Monday.

According to the relatives and locals of the deceased and police, Ruhul Amin was called from his house and taken away by some people including Mostafa and Sharif of the same village.

Later, Ruhul got angry near Swargram Government Primary School for arguing over the ground. When his cousin Abu Sayeed,45, came forward shouting at him, the attackers also hacked him. When the locals rushed to their shouts, the criminals fled.

Aminul Islam, Inspector (Investigation) of Ataikula police station said that after receiving the news, police visited the spot at night and recovered the body from the hospital and kept it in the morgue for autopsy. The initial idea of ​​the police was that the killings could be due to the dominance of the area and previous disputes.

However, the police said that the operation was underway to find out the exact cause of the murder and arrest those involved.