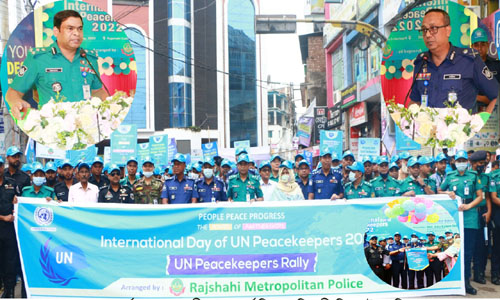 The outstanding contribution of peacekeepers from all over the world participating in UN peacekeeping operations is commemorated on this day with deep respect.

The day is celebrated with due dignity in Bangladesh as well as all over the world. On the occasion of this day, Rajshahi Metropolitan Police organized a colorful rally and discussion meeting.

This time the theme of Peacekeepers Day 2022 was “ Nayab charabit drva chadhathahbatnyaradhang “means” the people progress towards peace; The power of partnership “.

The program started at 10 am at Saheb Bazar Zero Point with the release of balloon festoons and pigeons. After that its colorful rally started from Zero Point and ended at Rajshahi College. Later a discussion meeting was held at Rajshahi College Auditorium. A video documentary on Bangladesh UN peacekeeping mission was screened at the event.
The chief guest of the function paid homage to Father of the Nation Bangabandhu Sheikh Mujibur Rahman with deep respect. He highlighted the main activities of Bangladesh in the UN peacekeeping mission. Greet the peacekeepers and remember the victims with reverence.

He extended heartfelt greetings and congratulations to all the peacekeepers of other countries including Bangladesh working in the UN peacekeeping mission. The hero who sacrificed his life for the great cause of world peace remembers the peacekeepers with utmost respect.

In his speech, the Police Commissioner presiding over the event referred to the historic speech given by Father of the Nation Bangabandhu Sheikh Mujibur Rahman in Bengal at the UN General Assembly. He highlighted the unique role of Bangladesh Police and other forces in maintaining world peace.

He thanked all the members of the police force, including the Army, RAB, BGP, various government institutions and educational institutions who participated in the program.