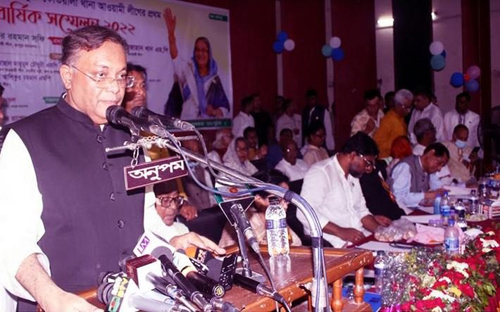 Information and Broadcasting Minister Dr. Hasan Mahmud narrated the glorious history of Awami League as a pro-people party since its inception in 1949 and its struggles for people’s rights and War of Liberation under the leadership of Father of the Nation Bangabandhu Sheikh Mujibur Rahman.

Minister urged the grassroots leaders and workers to project the government’s massive development works before the people as they will again vote for Awami League in the next general elections.

“Awami League is now in a stronger position across the country. Massive developments have taken place under the leadership of Prime Minister Sheikh Hasina. We will win the next general elections and Sheikh Hasina will be the Prime Minister again,” he said.

Awami League Presidium Member and former Shipping Minister Shajahan Khan, MP, attended the conference as the chief guest. “Achievement of independence under the leadership of Father of the Nation was the biggest success of the nation. Bangabandhu was assassinated in 1975 as he was rebuilding the war-ravaged country and the country produced surplus foods under his leadership,” Hasan said.

“If Bangabandhu was alive, Bangladesh would become a rich country much ahead of South Korea, Malaysia and Singapore,” Dr. Hasan said.

Under the leadership of Prime Minister Sheikh Hasina, Digital Bangladesh, a brainchild of Sajeeb Wazed Joy who is a son of Rangpur soil, has been built alongside massive developments and reaching all urban facilities at grassroots.

In the present Digital Bangladesh, home to 170 millions of people, there are 150 millions of mobile SIM cards in use. The Prime Minister is handing over houses to homeless people and doing many works through video-conferencing from her office.

“Every rural house has electricity. Many rural families have televisions, broadband internet connectivity, refrigerators, electric bulbs and fans and all other urban facilities following implementation of the ‘Amar Village, Amar Town’ program,” he said.

Dr. Hasan cited the tremendous successes achieved the country under the leadership of Prime Minister Sheikh Hasina by managing and controlling Covid-19 pandemic placing Bangladesh in the first position in South Asia.

He suggested grassroots leaders and workers of Awami League to reach the information of massive developments achieved in Digital Bangladesh to common people to bring the party again to power.