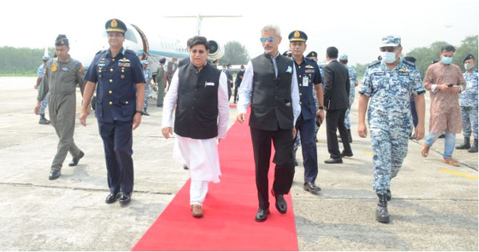 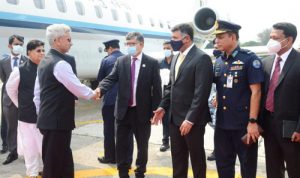 Jaishankar is scheduled to call on Prime Minister Sheikh Hasina at Ganabhaban at 4 pm. After that the Indian external affairs minister will hold a meeting with his Bangladesh counterpart Dr AK Abdul Momen at Foreign Service academy at 5 pm.

Bangladesh foreign minister will also host an Iftar followed by dinner in the honor of Jaishankar at the academy.
The Indian external affairs minister is scheduled to leave here for Bhutan at 8:30 am on Friday.

“The forthcoming visit of EAM (External Affairs Minister) to Bangladesh may be seen in the context of frequent bilateral high-level visits and exchanges particularly as both sides commemorate fifty years of the establishment of diplomatic ties,” Indian external affairs ministry said in a statement.

The last visit of EAM to Bangladesh was in March 2021. On Tuesday, Bangladesh foreign minister said, “Jaishankar might bring some good news … he will give us surprise”.

During the visit, the foreign minister said the date of seventh Bangladesh-India Joint Consultative Commission (JCC) meeting, which is scheduled to take place in New Delhi, would be fixed. “We will discuss all our major bilateral issues,” Momen added.

Prime Minister Sheikh Hasina last visited New Delhi from October 3 to 6 in 2019 to attend the Indian Economic Summit of the World Economic Forum (WEF). During the visit, the Bangladesh premier held bilateral talks with her Indian counterpart Narendra Modi.

Besides, Indian Premier Modi had visited Bangladesh from March 26-27 last year at the invitation of his Bangladesh counterpart to join the celebration of golden jubilee of Bangladesh’s independence, the birth centenary of the Father of the Nation Bangabandhu Sheikh Mujibur Rahman and the 50th years of establishment of Bangladesh-India diplomatic relations.