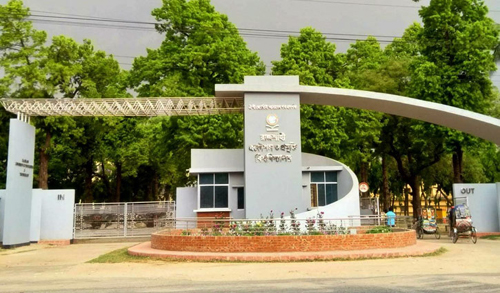 The authority of Rajshahi University of Engineering and Technology (RUET) shows reluctance to record minutes to different posts  through three notifications.

Although there is a rule to file the minutes in a hurry, the issue is being sidelined. But then three emergency cricket meetings were held. Although the Parliamentary Standing Committee on the Ministry of Education has decided to investigate allegations of irregularities and corruption against VC Prof Rafiqul Islam Sheikh in the recruitment of manpower for various posts in RUET, it has not started yet. Although a month has passed since the decision was taken, many have expressed frustration that the investigation has not started.

The decision was taken at the 15th meeting of the parliamentary committee held at the Jatiya Sangsad Bhaban on March 20.

During the meeting, the members of the committee expressed their indignation over the allegations of irregularities and corruption against the Vice Chancellor of RUET, which was published in several media outlets. They said that various data have already been collected to confirm the veracity of the allegations. It has been decided to investigate this.
According to RUET’s Registrar’s Office, 135 people were appointed to various posts in RUET in 2019 through three notifications. The appointment was passed at the 92nd syndicate meeting of the university on May 4 last year (2021). But the minutes of the appointment have not been recorded yet.

Sources said that although there is a rule to record the minutes in a short time, the matter is being sidelined. According to a source, the appointment is being reluctantly and unreasonably delayed in order to handle the ongoing criticism and ongoing controversy over the appointment.

But then three emergency cricket meetings were held. Asked about this, Professor Alamgir Hossain, a member of the University Grants Commission (UGC), said there is a rule to record the minutes of a decision on a matter as soon as possible. Although the law does not say anything specific in this regard.

Professor Dil Afroz, chairman of the UGC, said that an investigation has been launched into the alleged irregularities, nepotism and controversial recruitment of manpower against the RUET vice-chancellor. A letter has to be given to UGC from the Ministry of Education in this regard. After that the investigation will start. However, a letter from UGC has been sent to RUET VC in the wake of media reports about irregularities in recruitment. He could not be reached for comment.
However, an official of RUET said on condition of anonymity that VC Sir may have replied to the UGC letter.
AKM Aftab Hossain Pramanik, Additional Secretary (Secondary and Higher Education) of the Ministry of Education and a member of RUET, said that no letter has been received from the concerned department about the decision of the Parliamentary Standing Committee on the Ministry of Education. He said that the investigation is not going to start till the letter is received from there.

Attempts were made to contact Prof. Rafiqul Islam Sheikh, Vice Chancellor of RUET on his mobile phone to find out about the allegations