Bus supervisor torture at PUST hall, tried to kill and throw in the pond 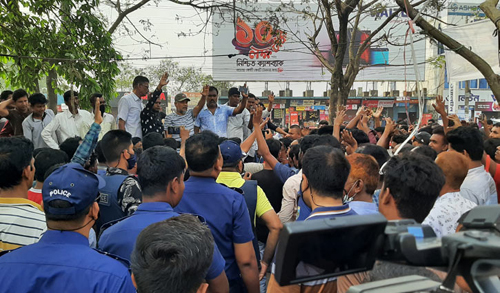 The supervisor of a bus from Dhaka to Pabna was taken into Bangabandhu residential hall of Pabna University of Science and Technology due to a quarrel and he was allegedly tortured by the students. They also tried to throw him in the university pond after being tortured.

The incident took place at Bangabandhu residence of the university on Wednesday morning. Tortured Abdul Barek Aslam is supervisor of the bus of MM Travels.

Bus workers erupted in immediate protest. They blocked the Dhaka-Pabna highway in front of the main gate of the university from 7am to 11am.

It is learned that MM Travels left Gabtali in Dhaka for Pabna around 11:30 pm on Tuesday. The bus stopped at Sirajganj hotel. When 10 minutes had elapsed since the scheduled time of the break, a student of PUST started behaving erratically. On the way, the student got into an altercation with the bus driver-helper and supervisor.

Later in the morning, when the bus reached in front of the main gate of PUST on the Dhaka-Pabna highway, some students who were already stationed and the supervisor was picked up from the bus and taken to Bangabandhu residence of the university. There he was severely tortured and his money was confiscated.

Tortured supervisor Abdul Barek Aslam said, “The student abused me for being 10 minutes late at the hotel. At this time I explained to him that we should go slowly for a while so that the bus could reach Pabna in a safe time in the morning. He also used it badly to light the bus lights on the way.

Even then I tell him – there is a possibility of robbery on the highway at this time, so the lights are on. In all these cases, 8/10 students picked me up from the front of the university. I was tied up there and beaten with a hockey stick. Hands and feet are also hit with hooves. At that time, some students tried to cut the limbs of the hands and feet and threw them in the pond. They also snatched Tk 41,000 from the bus belonging to me.

Meanwhile, when the incident spread among the transport workers of Pabna, tension was created. They started protesting by blocking the highway from 7 am to 11am on Wednesday. Hundreds of vehicles were stranded on the highway at that time. The common people fell into great misery.

Pabna district workers union convener and Pabna sadar upazila chairman Musharraf Hossain said, “Our workers are upset. It is unacceptable for a student to torture a supervisor in such a trivial matter. An emergency meeting of all our transport workers-owners has been called in the evening. Our district administration and higher authorities of the university will also be present there. If there is no proper solution to the issue, then a bigger programme will be announced from tomorrow.

Asma Haque, section officer of PUST told the journalists, “We are collecting all the data. The matter will be seriously investigated and legal action will be taken against the accused students.

Aminul Islam, officer-in-charge of Pabna police station said additional police had been deployed at the spot. Workers have been asked not to engage in any chaotic activities there. Legal action will be taken against the accused after a detailed investigation into the incident.