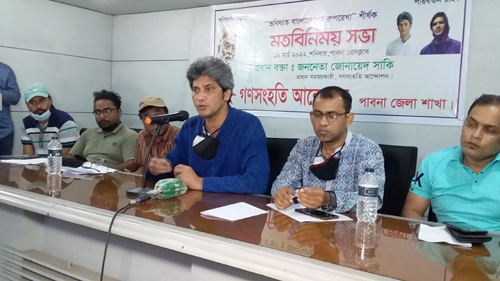 Jonayed Saki, chief coordinator of the Ganasamhati Andolan on Saturday at Pabna press club said in an exchange of views on title of “Outline of the Future of Bangladesh” on Saturday, referring to the various failures of the current soccer, “All democratic political parties must unite and work for the fall of this authoritarian government.” He called on all parties to support the March 28 strike.

He said this government has created division in the country. As a result of partition, the sovereignty of the country will be threatened. This government is putting the country in various dangers. Anarchy is moving towards rule. International support has cracked. That is why we have to bring back democracy by agitating against this fascist government. The right to vote must be established permanently. 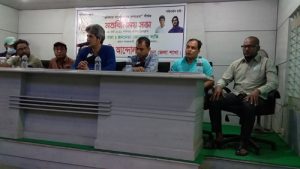 Party chief said the freedom fighters have divided the country as opponents. The country is divided by the spirit of freedom fighters. In the case of giving a job, it is being seen which family’s child is today. Why the child has to bear what the father did or did not do. No man is getting a fair share of his life.

In the name of development in the country, people have been put in various difficulties. Farmers are not getting a fair price for their crops. They are being subjected to various forms of harassment. There is no market system. There is no food control. The country and expatriates do not have minimum security.

Referring to the rise in commodity prices, he added that the government has given licenses to oppression, looting and syndicates. The people’s breath has risen. Some undemocratic people are advocating for Awami League. They say the country is doing well. Such democracy is good.

The intention of this bizarre, extremist, fascist government is to establish authoritarianism by stealing votes in order to come to power.

Zonayed also said that one cannot stay in power for long through oppression, murder, disappearance and terror. It broke down in a short time. Injustice cannot be called justice by using justice for its own benefit. ‘

He said that this government wants to hold the next elections in the framework of the last 2014 and 2018 elections. So, through the resignation of this government, only under an interim government formed on the basis of political consensus, the design election commission should be formed in acceptable elections. In the last 13 years, the government has established repression, oppression, killing and disappearance by force.

He said that 2.5 crore people are living in poverty today. It is the responsibility of the government to protect the dignity of every citizen.