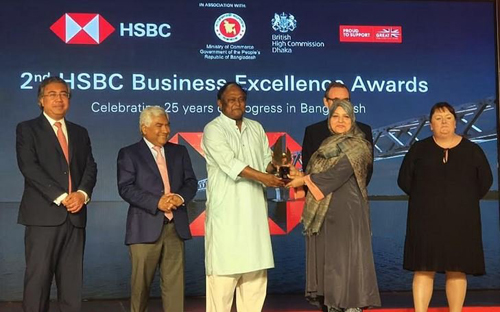 Pran-RFL Group, country’s one of the largest conglomerates, received the 2nd HSBC Business Excellence Awards for its role in promoting Bangladesh and contributing to the sustainable growth of the economy during the challenging time brought on by the Coronavirus pandemic.

The Hong Kong and Shanghai Banking Corporation (HSBC), honored the PRAN-RFL Group through a program in association with the commerce ministry and the British High Commission in Dhaka at a city hotel on Sunday evening, said a press release.

The British High Commissioner Robert Chatterton Dickson, President of Bangladesh Chamber of Commerce and Industry (FBCCI) Md Jashim Uddin and Head of Commercial Banking at HSBC South and Southeast Asia Amanda Murphy were present at the program. The group is exporting its products to 145 countries regularly.