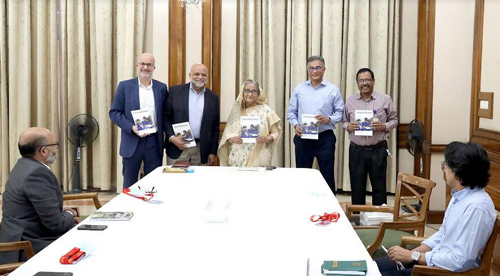 Prime Minister Sheikh Hasina today said the country’s desired advancement has become possible as her government has been working for development of different sectors in a planned way since it assumed power in 2009.

“Today’s achievement (becoming a developing nation) has become possible for continuation of the present government following the democratic process,” she said.

The Prime Minister said this while exchanging views with editors, Philip Auers wald and lqbal Z Quadir, of a journal “Innovations (Technology, Governance and Globalisation)” published by MIT Press after receiving the Volume 13, Issue 1-2, titled “Bangladesh at 50” at her official Ganabhaban residence here.

“The Father of the Nation (Bangabandhu Sheikh Mujibur Rahman) had a dream to give the people of the country a developed and prosperous life and people will live in peace. But, Bangabandhu along with most of his family members were assassinated before completion of his desired tasks,” she said.

Sheikh Hasina said she has been working tirelessly to complete the unfinished works of Father of the Nation Bangabandhu Sheikh Mujibur Rahman and she expects nothing for that, according to a press release of PMO’s press wing.

The issue of the Innovations journal was published marking 50 years of Bangladesh’s independence in which a write-up titled “Striving to Realize the Ideals of My Father” of the Prime Minister Sheikh Hasina was also published.

In the article, the Premier penned down the background of the Bangladesh independent struggle, Liberation War, Bangabandhu’s initiatives to reorganise a war-ravaged country, his days of forced exile, his return home and development of various sectors including agriculture, health, education, infrastructure, and ICT during her government tenure in 1996-2001 and till the date since 2009.

The unimaginable development of Bangladesh carried out by the Awami League government under the dynamic leadership of Prime Minister Sheikh Hasina in the last 13 years were described in the issue.

The editors of the journal requested the Prime Minister to write an article on her experience of joining the climate change discussion and facing natural calamities in the homeland due to the adverse impact of the climate change.