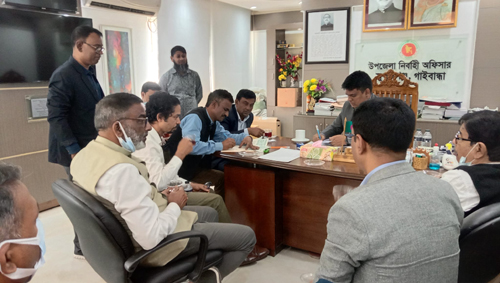 A memorandum of understanding (MoU) was signed between Horipur, Belka and Kapasia Union Parishads of SundarganjUpazila in the district and Bangladesh Red Crescent Society (BDRCS) on Thursday.

Earlier, a discussion meeting was also held at the auditorium of the upazilaparishad with UNO Mohammad Al- Maruf in the chair.

Chairman of SundarganjUpazilaParishadAshrafulAlamSarkerLebu addressed the meeting as the chief guest.

The function was also addressed among others by secretary of BDRCS, district unit MridulMostafiZontu, vice chairman of the unit Farhad Abdullah Harun Bablu, member of the unit Rezaul Karim Reza, unit level officer Rakibul Hasan Rakib and the chairmen of the parishads while project manager Amal Kumar Promanik moderated the ceremony.

Sources said, a new programme entitled Re-enforcing Rural Resilience (RRR) would be implemented in the unions of the upazila and many development works including raising of home steads, raising of school and bazar grounds would be done under RRR project.

Apart from it, Flood-tolerant tube wells, sanitary latrines and wash blocks will be set up, various livelihood and food security assistance, proper management of natural resources, quality and capacity building of community clinics will be implemented and various awareness and skill building programs on disaster and health will also be conducted under the programme, sources also said.

The Swiss Red Cross will provide financial and technical supports for the implementation of the works as a development partner, sources added.

To implement the works in the unions with transparent and through active participation of the Union Parishads the MoU was arranged.

UNO Mohammad Al Maruf in his concuding speeches thanked the authorities of BDRCS for biring the union of the upazila under their programme and urged the concerned to do the works in the programme command areas properly.

Upzila level officials, secretaries of the union parishads and media men were present on the occasion.