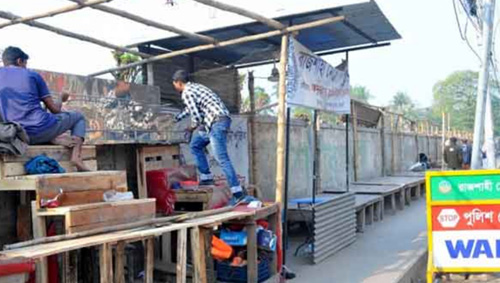 The sidewalk has been illegally occupied again. Although beautiful sidewalks have been built on both sides of the wide road, hawkers are doing business there under the umbrella of local influential people. On the other hand, pedestrians are suffering.

Rajshahi City Corporation’s executive magistrate often conducted mobile courts to remove illegal construction materials placed on the road and jail those involved. However, locals have complained that there is no regular crackdown on traders occupying sidewalks and roads. Although there were occasional raids, after a while the footpath was again illegally occupied under the umbrella of influential people.

It may be mentioned that most of the footpaths and roads of the metropolis were free from illegal occupation for a few days on the occasion of the 5th Bangladesh-India Cultural Fair in Rajshahi from 25th to 26th February. As a result, Rajshahi metropolis became more vibrant. Which did not escape the notice of Indian guests. They also praised the beauty of Rajshahi metropolis. But before the end of the cultural reunion, on the afternoon of February 26, the illegal occupants again sat on the sidewalk and adjacent road.

In the last two days, the city has been visited – C&B, Bhadra, Talaimari, Medical College Hospital area, Ghoshpara, Railgate, Newmarket, Alkar Mor, Ranibazar, Uposhahor New Market, Railway Station, Old Dhaka Bus Terminal, Manichatbar, Sahebbazar, Kumarpara. The area in front of Rajshahi College and even the sidewalk in front of Nagar Bhaban itself has been illegally occupied by the traders again.

Not just occupation, but business as usual. Occupying sidewalks and roads, car parking has caused additional misery. These shops and vehicles are occupying the sidewalks without heeding any regulation. And every day millions of people of different ages are going through these sidewalks and are suffering from extreme suffering.

In the public interest, even if various conversations are said, there is no one to watch them. Thousands of people could be seen on the road from Sahebbazar, Ganakpara, Alkar Junction, New Market, Railgate, Ladhipur and the circuit house at C&B Junction after 8 pm. It seems like a rural market. Not only illegal occupation but also parking of motorcycles, private cars and rickshaws is causing traffic jams in the important areas of the metropolis.

Rajshahi City Corporation Executive Magistrate Muhammad Imranul Haque said the number of vehicles in the city is increasing day by day. People are not yet respectful of the law. As a result, even though they have been raided and jailed more than once, they are not obeying the law. And those who are doing this do not think about the problems of the people. This is the big problem.