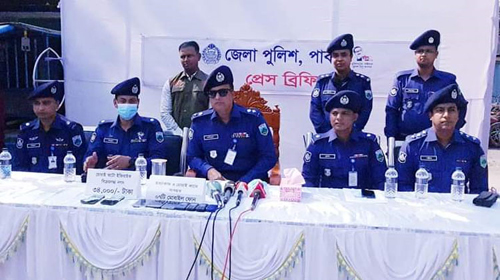 Pabna police arrested seven snaters along with 12 stolen easybikes, cash and mobile phones, one of the easybike snatching ring, who killed the driver at various places in a 36-hour continuous operation.

Later, according to him, 12 auto easy bikes stolen from different places in Pabna-Kushtia, Sirajganj and Natore districts were recovered during the drive and a total of 7 accused including master mind Sumon was arrested.

The detainees are three persons from Atgharia upazila in Pabna. They are Bachchu Mia,45, of Avirampur village of the upazila, Bazlur Rahman,24, a residence of of Debattar Uttarpara village and Hasan Ali,25, of Avirampur village, Sumon Sheikh,30, of Helalpur village of Khoksha upazila in Kushtia, Shamim Mia,25, of Baraigram in Natore and Chuck Baraigram, Shariful Islam,26, and Rafiqul Islam,24, a residence of of Bajitpur area of ​​Baraigram.