Soybean oil not available in Rajshahi 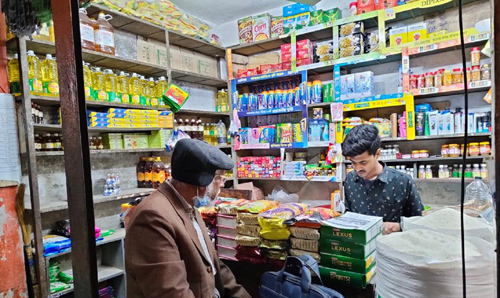 The price of soybean oil is constantly rising. The Rajshahi market has seen an oil crisis due to the gradual rise in oil prices. Consumers and retailers, however, allege that the soybean oil crisis has been artificially created in the market.

From morning till afternoon on Thursday, Saheb Bazar, Shiroil Kacha Bazar, Kajla Bazar and Court Bazar areas of the city were visited. Most of the shops in the market do not have bottled oil. Matching open oil. The shops have 500 gram, 1 liter bottles but there are no 5, 3 and 2 liter soybean oil bottles.

However, some retailers, who did not want to be named, said oil prices had risen steadily over the past two weeks. There is no 5 liter bottle of soybean oil anywhere in Oli-Gatile and big markets of Rajshahi. Everyone is cutting what was there long ago and selling it as open oil.

The shopkeepers also said that this price may go up further. According to grocers in grocery stores, superstalls and markets, oil is not available even with orders from oil companies. However, there are open oil reserves. But the price is Tk 8 to 10  per liter more than bottled oil.

Meanwhile, the sudden rise in oil prices has sparked outrage among buyers. Nupur is a resident of Kajla area of ​​the city. Oil came to the market to buy as soybean oil ran out.

When asked, he said, the oil has run out today while cooking. So he went to the shops next to the house to get oil, but did not get it. Later I saw in Saheb Bazaar that most of the shops do not have oil. There are two to four bottles of oil weighing 500 grams and 1 liter. However, there is no 5, 3 and 2 liter bottle oil. It’s all over.

Expressing anger, A Nupur said that the price of oil is increasing day by day. Soybean oil disappeared from the market. Where did so much oil go overnight? The government should pay attention to the extra value of daily commodities including oil. If it continues like this, the common man will run the family and how will he survive, said the buyer.
Another buyer came to buy soybean oil in the market. Rubel Hassan said he had been asking for oil from home for a few days. Today I come to the market to buy 5 liters of oil. I did not find 5 liters of oil in the whole market. Some stores charge 500 grams or 1 liter of oil but they charge more than the fixed price. So I have to return home without buying oil.
“I have been asking every company for two weeks to supply oil,” he said. But they are not giving oil even if they give it. Says there is no oil. Many are not coming to the company’s representative market. Again, many are not picking up the phone.
If you want to know about the artificial crisis of oil and the supply of oil to dealers, the Assistant Director of the Rajshahi Divisional Office of the National Consumer Protection. Hassan al-Maruf said that some unscrupulous traders syndicate is doing such dirty work. They are creating an artificial oil crisis in the market by keeping oil reserves. Our drive to increase oil prices and oil reserves continues. One shop was also fined last Tuesday. I am still conducting the campaign.
He said that there was an oil crisis in the market as grocers were not getting enough oil from dealers and oil companies. If this happens we must inform our superiors.