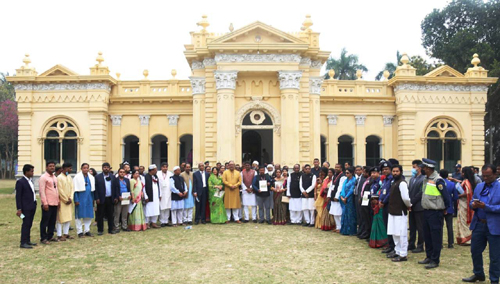 AHM Khairuzzaman Liton, convener of the cultural gathering fair, member of the presidium of Bangladesh Awami League and mayor of Rajshahi City Corporation was present during the day-long visit to various establishments in Puthia and Natore on Sunday (February 28).

As part of this, Indian guests visited Puthia Rajbari on Sunday and Natore Rajbari and Uttara Ganobhaban in the afternoon. At 12 noon, guests from Puthia Rajbari were welcomed with warm greetings. Later in the afternoon, Rasik Mayor AHM Khairuzzaman Liton and State Minister for Information and Communication Technology Junaid Ahmed Palak MP greeted the Indian guests at Rajbari and Uttara Ganobhaban in Natore.

It may be mentioned that a team of 36 members including the Minister of India came to Rajshahi on February 25 to take part in the 5th Bangladesh-India Cultural Reunion. They will return to India after the reunion on February 26.