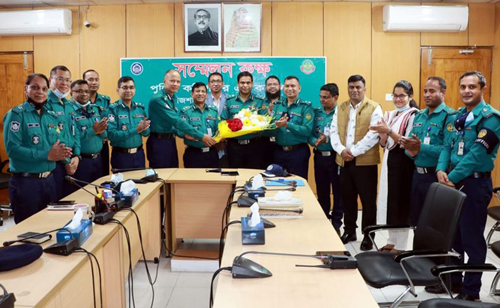 The RMP family congratulated the Commissioner of Police on the 24th anniversary of his successful career with flowers at a function held at the RMP headquarters at 12:30 pm on Tuesday (February 22).

He was working in Rajshahi Metropolitan Police as Assistant Commissioner of Police from the beginning of his service.

He has served as Superintendent of Police in Shariatpur District, Patuakhali District, Dinajpur District, Khagrachhari District and Joypurhat District.

He was working as DIG (Confidential and Counter Terrorism) at Special Branch, Dhaka.

He then formed a cyber crime unit and installed CCTV cameras across the city to make Rajshahi a safer city.

At the initiative of the Commissioner of Police, free door-to-door oxygen service is being provided in RMP by setting up a “Police Covid Autigen Bank”. In his unique humanitarian initiative, “Police Blood Bank, RMP, Rajshahi” has been established in RMP to provide free blood to dying patients.