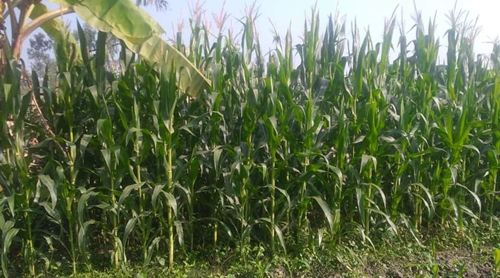 The vast tract of char areas of the river Dharla and Brahmaputra are now is in green scenario as the farmers are cultivating maize in a large scale.

This variety of crop is sometimes attacked with few diseases causing the farmers are cultivating such kind of crops in a vast tract of river side sandy char areas.

According to Kurigram Department of Agriculture Extension (DAE) 1300 hectares of land have been targeted under maize cultivation in all the nine upazilas of the district in this year.

The farmers of char areas said they are very interested to cultivated maize in the barren sandy char areas as it needs few labor, few cost but profit is more. It produces around two maunds of maize in per decimal of land where profit is double than production cost. Not only this but also its body is used as fuel, leaves is used as food for domestic animals. On the other hand, Maize is used as Atta, food of Fishes and food for poultry birds as balance diet.

The farmer Samsul Miah of village Namazer char under Saheber Alga of Ulipurupazila said we have cultivated maize in the barren sandy char areas as first time. Earlier we cultivated ground nut and other pulse variety of crops in the same land but we are expecting for bumper production as the favorable climatic condition and we will be benefitted.

The farmer Mukul Miah of village Goytapara under Roumariupazila and Abdul Jalil of Baguar Char said these land became   sandy after flood causing it is not fit for IRRI Boro cultivation. Consequently, we have cultivated maize here in this year.

The farmer Nirmal Chandra Roy of village PurbaDhaniram under Baravita union of Fulbariupazila said maize cultivation is more profitable than IRRI and Boro paddy. I have cultivated maize in five bighas of land in this year as its cultivation cost is few but profit is more.

Deputy Director (DD) of Kurigram DAE Abdur Rashid told this correspondent that to cultivate maize in per bigha of land at a cost of taka 6000-8000. The maize will be sold at tala 16000-17000 in per bigha and deducting the cultivating cost taka 10000-11000 is their net profit. He added further that we gave 2 kgs of seed, 10kgs MOP and 20kgs DAP fertilizer to the maize farmers as assistance free of cost. We are expecting for bumper production of maize in this year.