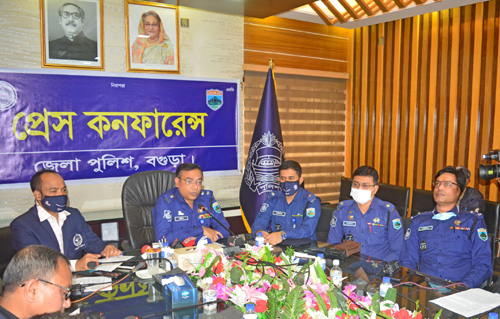 A Jubo-league activist was hacked to death, another was injured over the feud of love-affairs and Bogura district police team rapidly arrested three with knife, Jacket in connection with the murder within very short time.

In connection with the murder, Superintendent of Police (SP) of Bogura Sudip Kumar Chakrabarty BPM briefed at his office in Bogura on Wednesday afternoon.

The deceased was identified as Jubo-league activist of ward no-2 under Bogura Municipality Jubo-league unit Miraz Ali, 22, son of Abdur Rahman of Brindabonpara Southpara of Bogura town.

The injured was identified as Nazmul Hossain, 16, an inhabitant of the same town. Now he is under treatment as his house released from Shaheed Ziaur Rahman Medical College and Hospital (SZMCH) in Bogura.

The arrested are identified as an under-aged school student,16, of Nowdaboga Buritola, Tarek Rahman, 18, son of Munnu Mia of Boga Buritola under Sonatola upazila of Bogura and Mithun Mia, 28, son of Abdul Quddus of Rahman Nagor area under Bogura town.

Police Super briefed quoting from the accused Juvenile that a girl of Badurtola of Bogura town had a relation with the deceased and later she developed another relation with the convicted juvenile being acquainted through the social media.

Having the password of the face book of the girl, Miraz asked her about the relation and she later told him the Juvenile that later Miraz and the accused Juvenile gave threat each other and at a stage, Miraz called the accused Juvenile at Poura Park in Bogura town and at a stage, they locked into a hot-talk and the accused youth, his cohort Mithun hacked Miraz and his companion Nazmul and they were rushed to SZMCH, Bogura and on duty doctor called him dead, added the SP.

Later deceased’s brother Ataur Rahman lodged a murder case with sadar police station in Bogura accusing some unidentified killers and later through hectic effort of Bogura district police, the accused were arrested from their areas of sonatola of Bogura.

Superintendent of Police (SP) of Bogura Sudip Kumar Chakrabarty BPM said that the Investigation Officer (IO) will conduct further huge investigation in connection with the case to trace-out the real fact, to arrest the killers of the deceased and 7-day remand will be asked before the court.