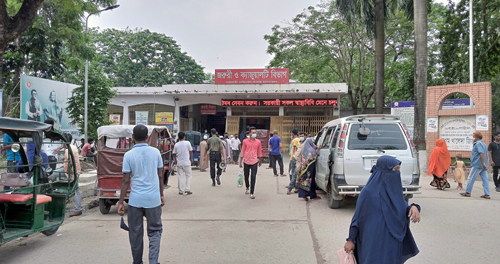 The youth of Rajshahi have demanded 16 points including installation of automatic digital traffic signals in Rajshahi city, removal of Shiroil and Dhaka bus terminals and relocation to Naodapara.

The demands were made by an organization called Youth Action for Social Change-Yass.

In addition, the divisional commissioner GSM Zafarullah, the chief executive officer of the city corporation. A copy of the affidavit has been handed over to ABM Sharif Uddin, Additional Chief Engineer, Roads and Urban Development Department, Sadekul Islam and Anirban Chakma, Deputy Commissioner of Traffic, City Police.

Notable demands are among the 16-point demands

(1) Establishment of footover bridges for safe passage of pedestrians at roadside educational institutions and various important public places in the city including 34 places proposed by Yass; (Ii) Adequate zebra crossings, traffic directions, automatic digital traffic signals, designated stops, passenger canopies and designated parking zones, installation of closed circuit cameras (CCTV) as well as deployment of traffic police at educational institutions and various important places of the city, roads and intersections; (3) to provide separate lanes for small vehicles, including bicycles, and for emergency service providers, including fire services and ambulances, to facilitate safe movement throughout the city; (4) construction of sidewalks for the elderly and women-child-friendly and regular renovation of sidewalks throughout the city; (5) Immediate removal of Shiroil Bus Terminal and Dhaka Bus Terminal including stoppages of all types of unplanned vehicles and transfer to Naodapara Bus Terminal; (6) to stop the movement of heavy vehicles including long distance buses and trucks through the city to make the city safe and secure; (6) To free all footpaths and roads of the city to ensure smooth movement of pedestrians.

The memorandum also requested to take necessary steps to improve the quality of road infrastructure, increase awareness and vigilance about traffic laws and expeditious implementation of road transport laws in order to immediately prevent road accidents and restore order and ensure safe movement.