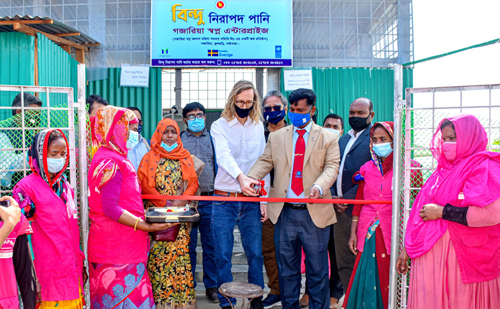 A Bindu Water Treatment Plant (BWTP) was installed in the Ashrayan Project at Gozaria under Fulchhariupazila in the district today aimed at providing safe drinking water to the beneficiaries of the project and the people of its surrounding areas.

A number of employees under the banner of GozariaSwapnoKalyanMohilaSomobaySamity Limited formed at the initiative of Strengthening Women’s Ability for Productive New Opportunities SWAPNO Project funded by UNDP SIDA, and Marico completed the installation work of the WTP.

Yesterday, an inaugural ceremony was also held at the Ashrayan project with deputy director of Local Government Section of DC office Rokhsana Begum in the chair.

National Project director(NPD) and also joint secretary of Local Government Division of the government, Md. Habibur Rahman addressed the function and inaugurated the BWTP as the chief guest and Marcus Johannesson, first secretary of Swedish Embassy, Bangladesh, Dhaka, spoke at the event as the special guest.

NPD Md. Habibur Rahman in his speeches said the SWAPNO project is being implemented in all unions of Fulchhariupazila by the respective union parishads in partnership with Local Government Division, creating positive impacts to the employees involved in the project.

The WTP would play significant role to provide safe drinking water to the people of Ashrayan project and the people of its surrounding areas, the NPD added.

The NPD also urged the beneficiaries to take care the BWTP like their children to get water from it for long timewithout any trouble.