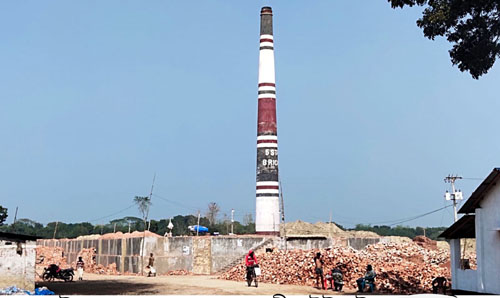 Illegal brick kilns are running in Charghat of Rajshahi by destroying crop lands and ignoring government regulations. As a result, not only agriculture but also the environment is getting polluted. The affected locals are not getting redressal even after complaining to the environment department and local administration.

It has been alleged that these illegal brickfields have been set up by managing the local administration.

The locals have been protesting since the construction of the brick kiln but to no avail. Illegal brickfields are continuing to destroy the balance of the environment by the force of power. As a result, the conscious people of the area are fearing extreme loss to the students of Amaphal and Kamalmati of 6 schools in the vicinity of Anupampur area.

Locals complained to various departments including the Upazila Nirbahi Officer verbally and in writing to stop the illegal brick kiln but to no avail. This has made the illegal activities more reckless.

On condition of anonymity, a school teacher in Anupampur area said that according to the provisions of the Brickfields Act 2014, if there is any settlement within half a kilometer area and any educational institution within one kilometer area, brick kiln cannot be made there.

Despite having such a law by the government, four educational institutions within 200 meters and two brickfields named five-star and six-star have been illegally constructed in Anupampur area of ​​Charghat despite the existence of large population and mango orchards in the vicinity. Those who do not have any kind of valid documents.

When contacted, Shamsul Haque, owner of the illegally constructed five-star brick kiln, said that an application has already been made to the concerned authorities for a valid brick kiln license. He said about the loss of Kamalmati students in the brick field very close to the educational institution, there are some problems when it comes to doing something. However, he said, many people like me have built the brick field in this way.

Upazila Nirbahi Officer Syeda Samira said the matter has already been brought to the notice of the Environment Department. He also said that necessary steps would be taken to identify the illegal brickfields in a short time.