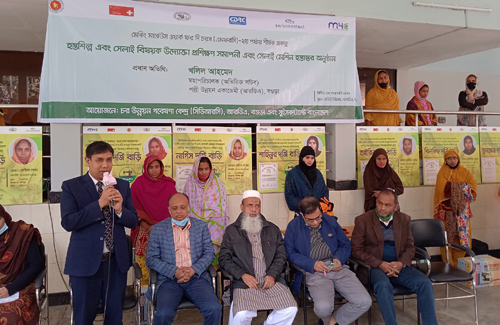 The Making Markets Work for the Charas MFORCI-2 project is aimed at economic development, market connectivity and job creation for the people of Char. We are committed to reducing poverty and vulnerability by creating income and employment opportunities for the poor families of the designated chars by conducting agricultural market development activities in the char areas, said Dr. Md Abdul Majid Pramanik, joint director of Rural Development Academy (RDA) and project director of Mforci-2 project.

The concluding ceremony was held at the RDA Auditorium on Tuesday to conclude the month-long ‘Entrepreneur Training Course on Handicrafts and Tailoring’ under the project titled ‘Making Markets Work for the Charas (MFORSI-Phase II) under implementation by the Rural Development Academy (RDA).

At the end of the discussion, the concluding ceremony of the training course was concluded with the pledge to improve the living standards of the poor and disadvantaged people living in the char areas by providing assistance and micro-loans for the project titled MFORCI-II.

The closing ceremony was attended by representatives of SwissContact, faculty members of RDA, Project Director of MFORCI-II Phase Project and RDA.

It is learned that the project titled “Making Markets Work for the Charas Empowerment-Phase II” is being implemented by the Government of Bangladesh and the Swiss Embassy in Bangladesh with funding from the Rural Development Academy (RDA) and SwissContact Bangladesh.