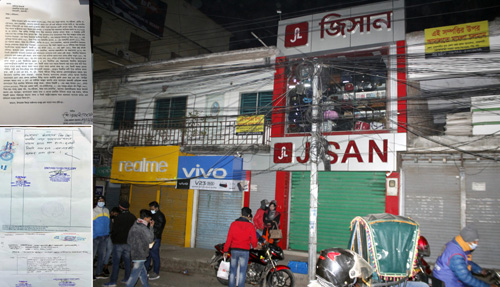 Two women were beaten and injured by miscreants while trying to occupy a shop by disobeying a court order in Rajshahi metropolis.

The incident took place on Monday (February 8) at 11:30 am on the north side of the Jisan showroom, west of the Islamic Bank Newmarket branch in Newmarket.

The injured are Mosa: Rahima Khatun (65) and Mosa: Ruma Khatun (48). They are mother and daughter.

According to the injured, 18/20 miscreants were breaking the lock of the shop for the purpose of occupying the shop house. Alamgir Hossain, Raihanul Islam Emon, Touhidul Islam Hridoy’s tenants Rubel and Sujan and their hired miscreants beat and injured them when they obstructed them.

At that time they saw the police of Boalia Model Police Station coming and they fled. The injured were later rescued with the help of their families and taken to Rajshahi Medical College Ramek Hospital. They are currently undergoing treatment there.

Md Jamal Hossain, son of the injured woman, has lodged a complaint with Boalia Model Police Station on Monday.

Citing the complaint, it is learned that there is a case pending in the District Rajshahi Joint District George 1st Court on 8/2019. The case is pending between plaintiff Md. Jamal Hossain Ding and defendant Mosa Lutfun Nahar Ding.

But while the Batwara lawsuit was pending, the defendant Mosa: Lutfun Nahar, in addition to fabricating, false, forged documents, illegally rented a shop house on the property to a company called Rubel Telecom.

Alamgir Hossain, Raihanul Islam Emon, Touhidul Islam Hridoy’s tenants Rubel and Sujan and their 18/20 tenant miscreants tried to break the lock of the shop occupied by Jamal Hossain at 11:30 am on Monday.

When Jamal Hossain and his mother and sister resisted, the tenants’ miscreants beat and injured them. After seeing the police of Boalia Model Police Station coming to the spot, they quickly fled from there.