Extreme suffering due to rain of Magh 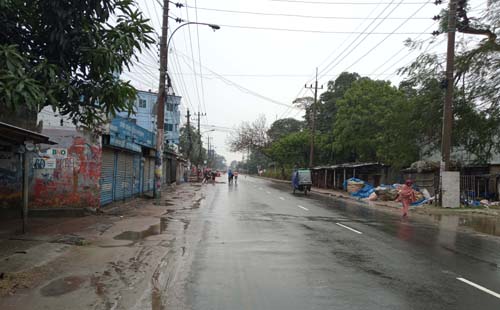 The people of the northern part of the country are suffering due to continuous rains in mid-Magh, even though the cold wave has started to subside. In Rajshahi, winter is in full swing in the rain of Magh. Although it has been raining heavily since midnight on Thursday, the amount of rain has increased since 7 am. Floating and low-income people have suffered in this.

The Rajshahi Meteorological Office has recorded 20 mm of rainfall till 11 am on Friday.

Rajshahi Meteorological Office senior observer Debal Kumar Maitra said it started raining at 4.30 am. Then the rainfall is 1.2 mm. It starts again at 8:20 in the morning. A total of 10.6 mm of rainfall was recorded till 9 am and 20 mm till 11 am. The minimum temperature was recorded at 17.2 degrees Celsius. He said, “Rainfall is forecast for the whole day. When the clouds in the sky disappear, the temperature will decrease again. Then the winter will increase. ‘

It is also raining in the northern district of Panchagarh. The Tentulia Meteorological Center recorded 3 mm of rain at 9 am on Friday. The minimum temperature was 11.2 degrees Celsius.

Tentulia Meteorological Center Officer-in-Charge. Russell Shah said, “Even though the cold spell has stopped, the sky is overcast. It is raining heavily in different parts of the district including the city and it is getting colder in the cold air. Hardworking people could not join the work. Especially the misery of agricultural workers and rickshaw-van drivers has been seen more. The movement of people on city roads and highways has also decreased.