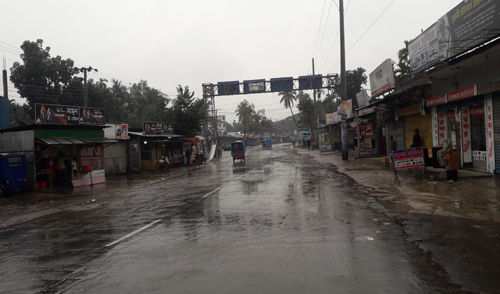 The normal life has been paralyzed in Kurigram due to drizzling in all the day and biting cold wave from early hours on Friday (February 04). The laborers of Kurigram district are the worst sufferers as they did not go to their respective works due to disrupted weather. 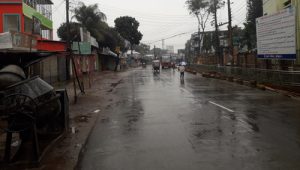 The day laborers, agricultural laborers, masons, Rickshaw pullers, Van drivers and construction workers lead their families here from hand to mouth were forced to stay in their houses. Seldom vehicles were found on the road.

Hanif Uddin 56, a Mishuk driver of Gorosthanpara under Kurigram municipality told that the rainfall started at the end of Bangla month of Magh. Consequently, no passenger was found in the road. Akbar Ali, a day laborer of Palasbari in KurigramSadarupazila told that the cultivation of Boro paddy is going on in full swing. We are working violating biting cold but we are not working in the filed today due to rainfall.

On the other hand potato fields may be attached by Let Blight disease, local farmers said.

Sub Assistant Agriculture officer of KurigramSadar Abdul Mazid said potato fields may be attached by Let Blight disease if the disrupted weather continues several days. But if the sunlight is found then the potato fields will no harm.

Officer-in-charge of Rajarhat Agriculture weather ObservatoryAnisur Rahman said 11 mm rain fall was recorded at 9 am on Friday. In addition, the lowest temperature 13.5 degree Celsius was also recorded in the same time.