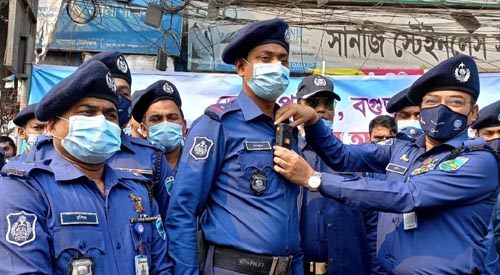 The body-worn camera for Bogura Traffic police has been inaugurated by the Superintendent of Police (SP), Bogura Sudip Chakrabarty BPM at Shatmatha in Bogura on Thursday noon.

The initiative was taken to release the crimes and traffic congestion in the busiest town of the country, Bogura, the gateway of the northern part of the country.

Traffic Inspector (Admin) of Bogura Rafiqul Islam said that initially 12 body-worn cameras have been fixing the traffic sub-inspector and town sub-inspectors and by turns, the number of the cameras will be increased.

Sudip Chakrabarty BPM, Superintendent of Police (SP), Bogura said that to keep pace with the modern and advantaged world, Bangladesh Police have been working hard and the inauguration of the body-worn cameras is the part of the modernization.

The police department will be taken under accountability and corruption-free through the installation of the cameras and the people have kept their faith on the members of the police as the record of the real incidents, video footage through the modern GPS connection will be preserved for the greater interest, added the SP.