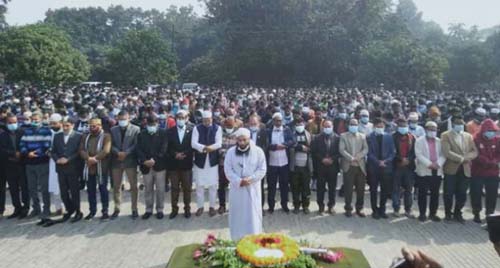 Janaza of Mahbub Habib Himel, a student of Fine Arts Department of Rajshahi University (RU) who was killed in a truck crash has been completed.

His janaza was performed at 11 a.m. on Wednesday (February 2) at the university’s central mosque grounds. From there the body was taken to Natore for burial.

His second janaza will be held at 2 pm at Kapuriapatti Navavidhan High School ground in Natore Sadar Upazila. After that, Himel’s burial will be completed at Garikhana Central Cemetery in Natore.

Meanwhile, Himel’s classmates have demanded exemplary punishment and trial of the culprits in the incident.

Himel’s uncle said. Munna said, my sister used to be husbandless, now she is childless. I don’t want any other mother’s lap inside the university to be empty. The administration should implement the demands of the students as soon as possible. He prayed for the forgiveness of his nephew’s soul.

RBI Vice-Chancellor Professor Golam Sabbir Sattar said, “I understand how heavy the body of a child is on the father’s shoulder.” Today my body was supposed to be on Himel’s shoulder. The Vice-Chancellor assured to always be by the side of his family. Five lakh rupees has already been transferred to the account of Himel’s mother, said the vice-chancellor. He assured that further cooperation would be provided step by step.

Meanwhile, his classmates are mourning the death of Himel. Many have been seen breaking down in tears. The green campus of Motihar became heavy due to the presence of his relatives. Students are taking 10 university buses to his village home to complete the funeral of the deceased Himel.

Mahbub Habib Himel was killed in a truck accident near the Science Building under construction in front of the Habibur Rahman Hall of the University on Tuesday (February 1) at around 9 pm.