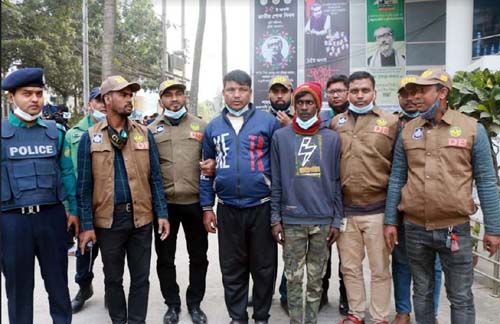 Police have arrested the driver of a truck that crushed Himel, a student of Rajshahi University.

Kashiadanga police arrested him from his home at 1:15 pm on Wednesday (February 2).

The arrested driver said. Titu (42) is from Balia village of Kashiadanga police station.

Kashiadanga Police Officer-in-Charge (OC) SM Masud Parvez confirmed the matter and said he was being arrested and taken to the DB office for questioning.

Incidentally, Mahbub Habib Himel, a fourth year student of the Graphic Design Department of the Faculty of Fine Arts, was killed when a truck hit him in front of Shaheed Habibur Rahman Hall at around 9 pm on Tuesday (February 1). He was a resident student of Shaheed Shamsuzzoha Hall and General Secretary of Rajshahi University Drama Association (RUDA) and Office Secretary of Central Cultural Alliance.

Raihan Pramanik, a fourth year student of the Department of Ceramics and Sculpture, was injured in the incident. He is undergoing treatment at Rajshahi Medical College (RAMEC) Hospital, Ward 31.