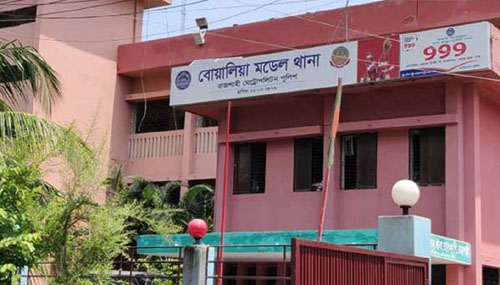 Two brothers have been arrested in connection with the snatching of money and mobile phones in Rajshahi city.

Police arrested two persons from the Shaheed AHM Kamaruzzaman bus stand area of ​​Shiroil around 8:30 am on Saturday. Police recovered two walkie-talkies from the two brothers. Two men have since been arrested in connection with the robbery. Rajshahi police are fighting over the rescue of Wakitki from the snatcher.

The two arrested are Mavel Islam alias Mavel (24) and his brother Nehal Islam alias Niro (22). They are residents of Barabanagram Baganpara area of ​​Shahmakhdum police station. The two were taken to court on Sunday afternoon. Boalia police requested a seven-day remand for the two.

According to police sources, an investigation has been launched into how the two snatchers got to the police. The number of walkie-talkies is already being verified in each police station. It remains to be seen whether their numbers are correct. A letter has been issued from the Rajshahi Metropolitan Police Headquarters asking whether there is a shortage of walkie-talkies in any police station or police outpost. An expert team has also started working in this regard.

According to police and case statement, Tariqul Islam MP, a resident of Karnahar area of ​​Rajshahi, got into a coach named Safari from Dhaka at Shiroil bus stand in Rajshahi around 8:30 am on Saturday. At that time, Mavel Islam and his brother Nehal Islam dragged Tariqul inside the terminal.

Under the guise of DB police, they snatched six thousand rupees and a mobile phone in the name of searching Tariqul’s body. Fearing that marijuana and yaba had been found, the family members were asked for more money for development from Tariqul’s mobile phone. When Tariqul wanted to leave, he was taken out of Wakitki and threatened with a drug case.

Curious crowds flocked to the terminal to witness the incident. Seeing the crowd, a patrol team of Boalia Model Police Station reached there. The two men saw the police and tried to flee. They were later detained. Later, the victim Tariqul snatched the case.

According to a source in the city police, Mavel and Nehal worked as an OC and SI source for a police station in the city. The two have recently been transferred to another location. The two men were involved in kidnapping and drug trafficking as police sources. There are already at least four cases in their name. The two were kept at the police station all day yesterday for questioning in connection with the incident.

They were taken to court yesterday (January 31) at noon and remanded.

Boharia Model Police Station OC Mazharul Islam said the victim had filed a snatching case against the two detainees. A seven-day remand has been sought for the two accused in the case. However, the remand application was not heard today. Asked about the walkie-talkie used by the police, he said it was not yet confirmed whether it was the police or not. Verification and selection is going on with this.

Rajshahi Metropolitan Police Additional Deputy Commissioner. Ghulam Ruhul Quddus said that their expert team is working to make sure whether it is the police or a walkie-talkie.