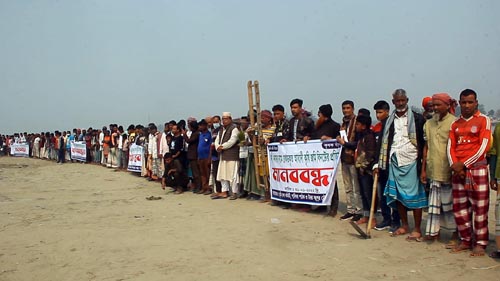 Hundreds of farmer formed a big humanchain in Pabna’s Bera upazila to protest against the cutting of crop land in the name of digging the Hurasagar River of Bera upazila in Pabna on Monday noon.

The aggrieved farmers took part in the humanchain held under the banner of Land Protection Committee on the banks of Hurasagar River at around 2pm. 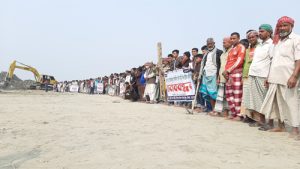 They complained that there were lands owned by thousands of farmers on the banks of the Hurasagar River. Recently, the contractor started digging with red flags at different places of the river.

The farmers complained that besides digging the river, they were cutting down the land owned by the farmers on the banks of the river. Although the farmers obstruct cutting the soil but they do not obey. In the darkness of the night, the soil is being sold with the help of trucks and trawlers.

Farmers are seeing darkness with two eyes after losing crop land. In such a situation, the farmers have sought the intervention of the concerned department of the government not to cut the soil of the crop land outside the river dredging.