Leprosy a curable disease now, not a curse- health expert 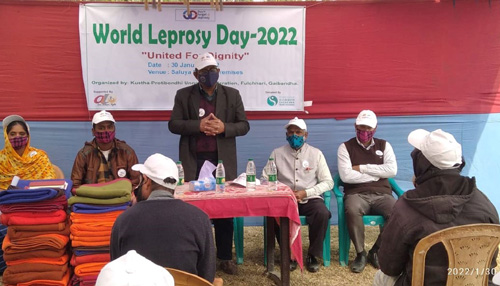 Health experts in a function said, leprosy is not a curse and it is like any other diseases and at present, leprosy is curable disease in all stages if the patients are taken under proper and regular treatment programme.

“The loss of touch, pain and temperature sensations in the skin, loss of movement or paralysis of the muscles and loss of sweating and absence of itching are the early signs of leprosy which mainly spreads through the air,”

They made the comments while addressing a post rally discussion meeting held at SaluaEidgaMaidan under Fulchhariupazila in the district on Sunday noon marking the World Leprosy Day-2022.

FulchhariKustha o ProtibandhiUnnayan Foundation arranged the function with the financial support of Sasakawa Health Foundation, Japan and in cooperation with ALO Society and The Leprosy Mission International Bangladesh (TLMIB).

Upazila health and family planning officer Dr. Md. Rafiquzzaman addressed the function as the main focal person and said this year’s theme of the day is “United for Dignity”.

The speakers in their speeches underscored the need for creating much awareness among the people about leprosy, finding out the leprosy patients and then bringing them under free treatment facilities to build a leprosy free society.

Later, a UthanBoitha was also held at Machher Vita village where the mass people were made aware about leprosy and its treatment. A number of blankets and flashcards were also distributed to the leprosy patients at the initiative of FulchhariKustha o ProtibandhiUnnayan Foundation.