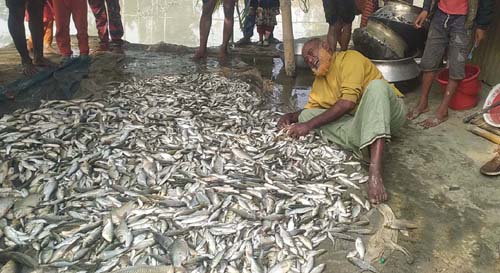 Miscreants killed fishes pouring poison in a pond at Porarvita village under Bhogdanga union in KurigramSadarupazila enmity at dead of night on Saturdaydue to previous.

Sources said the fish trader Anowar Hossain maintains his family by pisciculture in a pond on 44 decimals of his own land near his house for long.He alleged that his rival group poured poison in his pond at dead of night due to previous enmity.Consequently, various kinds of 12-13 mounds of fishes worth taka 2.50 lacs died.

His neighborEkramulHaque and Taiyab Ali said AnowarHossain maintains his family by pisciculture. His son is a school student. They claimed exemplary punishment of those miscreants who did it.

Officer-in-charge of KurigramSadar police station Khan Mohammad Shahrear said we will take lawful action after getting the complaint from the fish trader.