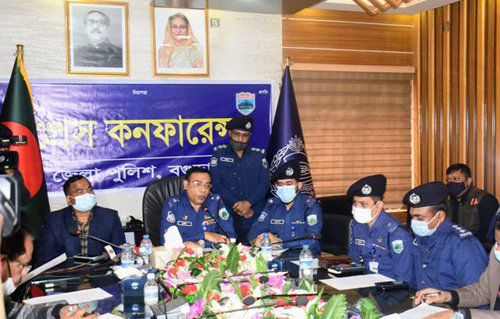 Bogura district police have unearthed the killing of elderly Van puller and arrested five including a couple in connection with the killing incident at Dakumara under Shbgonj upazila in Bogura on Dev 16 last year. 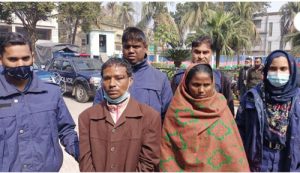 Following the killing, deceased son Aminul Islam lodged a case with Shibgonj police station on Dec 18 last year. Case statement said that the complainant lodged case against some unidentified persons and on January 27, 2022, police arrested Saidur allies Megha and on his information, police recovered the lost Van and arrest the other three and later Saidur confessed the fact in section 164.

Police quoting the arrestees said that initially they hired the van for Baluahat area under Sonatola and later at Dakmara area; the deceased was tactfully drunk tranquilizer and left him when he became senseless, later under treatnment he died after two days of accident.

Superintendent of Police (SP) of Bogura Sudip Kumar Chakrabarty said in a press briefing with other high officials that the way of the killing of the elderly Van puller is not normal way by the syndicate and the people should be aware of such killers.

Police will conduct some punitive steps to stop such crimes in the district with the help of the people and media men and they will also make database in connection selling such vehicle in the district, added the SP.