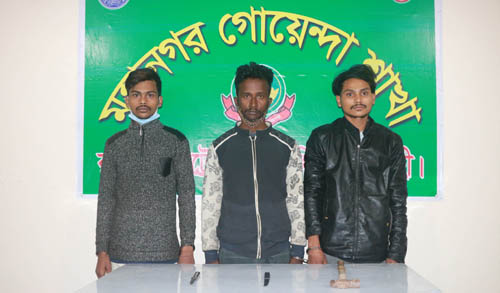 A team of Metropolitan Detective Branch (DB) has arrested three kidnappers in a raid in Rajshahi metropolis. At that time 2 knives and 1 hammer used for snatching were recovered from them.

They were arrested on Friday (January 26) at 9pm from Ghorachattar Koraitala area of ​​Rajpara police station.

This information was confirmed by the Deputy Commissioner of Police (DB) of the Metropolitan Intelligence Branch Md. Arefin Jewel at 12 noon on Saturday.

He said that it was learned on the basis of secret information at 9 pm on Friday that some snatchers were stationed under the hood of Rajpara police station. On the basis of such information, the operation was conducted under the overall supervision of Deputy Commissioner of Police, Md. Arefin Jewel, Additional Deputy Commissioner of Police (DB) Md. Abdullah Al Masud, Inspector of Police Md. Abul Kalam Azad, SI Md. Nurunnabi Hossain and allied forces. Three hijackers were arrested at the time. Two knives and a hammer used for snatching were recovered from them.

He further said that there are several cases of snatching, drugs and other cases in the name of those arrested in different police stations of the metropolis.

Legal action has been taken against the arrested accused.

DB DC also said that they were handed over to the court at 11:30 am on Saturday.