At least three lawyers have been assaulted in an attack by outsiders due to a dispute between the complainant and the accused in the dowry case.

The incident took place at the court premises on Wednesday afternoon. Lawyers in the district are angry over the incident. 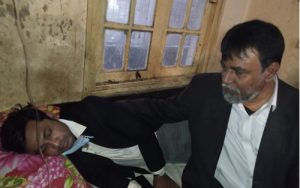 Abdul Ahad Babu, former secretary of the Pabna Bar Association, said Khairul Alam Dulal, a senior advocate in the Pabna court, came to the court on Wednesday morning with his client Md Kamruzzaman and his client’s son-in-law Md Masuduzzaman. They came to take part in the hearing on the formation of charges in the dowry case filed by Kamruzzaman’s wife.

They were eating at a hotel near Pabna Bar Association when a group of outsders youths abducted them. Although Kamruzzaman was able to escape at that time, the youths grabbed his son-in-law Masuduzzaman and kept him in a room of Tarash Bhaban and later in a room of LMB Market.

Later, the outsiders again came to the court premises and started arguing with Kamruzzaman and his lawyers on the issue of the case. When the lawyers tried to handle the situation, they started beating Rizvi Shaon, Ashrafuzzaman Prince and Plavan at the Pabna Municipality premises. At one stage, the lawyers ran to the municipality building and took shelter, but the youths from outside started beating them there as well. 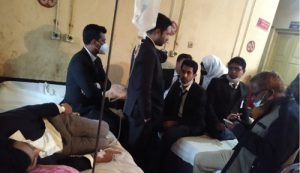 Injured lawyer Rizvi Shaon said, “We were hearing about the abduction of a witness in the case of senior lawyer Khairul Alam.” At this time, outsiders led by two young men named Johnny and Rashed started beating us. They kidnapped witness Masuduzzaman and threatened him. Later, after a couple of hours, he left for Tk five thousand.  I never imagined that I would be the victim of such an attack on the court premises. We want justice for this incident.

Saiful Islam, a lawyer for the Pabna court, said that despite the attacks and beatings in the municipality premises and in front of the mayor’s office, the municipal authorities did not take any action to protect us. On the contrary, after receiving the news of the attack, the fellow lawyers went to the municipal office to rescue us but they were not allowed to enter. For a long time the main gate of the municipality was locked.

Pabna Municipality Mayor Sharif Uddin Pradhan said, “I heard that some of the lawyers entered the municipal premises and some of them followed them and beat them up.” Outsiders join the crowd of birth registration service candidates after the scuffle. Later, in a group of lawyers, the gate was kept closed in the interest of safety. However, we could not identify the attacker in this case.

Pabna Sadar Police Officer-in-Charge (OC) Mohammad Aminul Islam Jewel said, “We went to the spot after receiving the news but no one was found in the premises of the municipality office.” Action will be taken if a written complaint is received in this incident.

Advocate Abdul Ahad Babu said it was very sad that outsiders attacked lawyers and insulted them. The Bar Association will take action in case of assault and assault on lawyers. The matter of filing a case is also under process.