Pabna Municipality received an ambulance as a gift from the Government of India as part of a promise made on the occasion of the Golden Jubilee of Independence.

Assistant High Commissioner of India to Rajshahi Sanjeev Kumar Bhatti handed over the keys of the ambulance to Pabna Municipal Mayor Sharif Uddin Pradhan on Thursday noon. He said that a total of 109 ambulances promised by the Indian government, many have already been delivered to various institutions in the country. 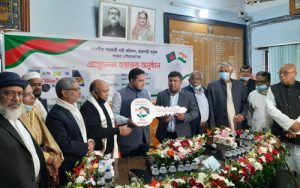 Equipped with state-of-the-art life-saving equipment, this ambulance is capable of providing emergency medical services and life support to the patient.

A function was organised at Pabna Municipal ground on the occasion of the handover.

Sanjeev Kumar Bhatti said that as a close friend of Bangladesh, India is committed to do whatever it can to help Bangladesh to the best of its ability in improving public health and welfare of the people.

On the occasion of the birth centenary of Bangabandhu Sheikh Mujibur Rahman and the golden jubilee of independence, Indian Prime Minister Narendra Modi announced in March in the last year that he would provide an ambulance to Bangladesh.

Pabna Municipality mayor Sharif Uddin Pradhan in his speech expressed deep gratitude to the Government of India, assistant high commissioner and the people of India for providing this ambulance to the municipality.