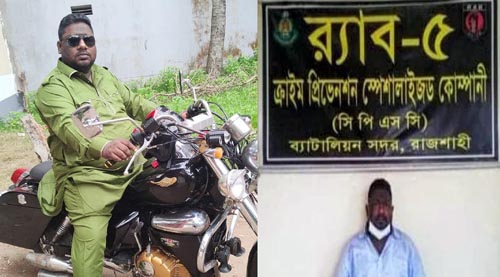 Md The members of RAB-5 have arrested the fraudster named Noor-Islam Milon (38).

An expedition team from RAB-5, Rajshahi’s CPSC, Mollapara camp arrested him from a rented house in Ghoramara area (Dildayar Bagh) under Boalia police station at 11am on Tuesday (January 11).

It is known that Md. Fraudster Md. Raihan Ali (35) took Tk 21 lakh 90 thousand  from a person named Rajshahi Railway in the name of giving a job as a booking assistant. Noor-Islam reunion. He later embezzled the entire money without giving her a job.

Raihan Ali said that he got acquainted with the cheater Milon through an acquaintance of his in 2015. At that time, Raihan was looking for a way to get a job in Railways by passing Honors. When Milon finds out about the matter, he tells her that he has a man from the big court in his hand. It is possible to get a job only if you pay according to the demand. The manner of speaking was such that the job did not matter. So Raihan trusted him and gave him the responsibility to talk to the people of the big court.

After that, the fraudster Milon Raihan was told that if he wanted to get a job, he would have to pay Tk 22 lakh. In simple faith, the victim Raihan paid him 19 lakh 90 thousand  twice. However, Raihan took a check for the same amount from Milon. After a year, Raihan did not get a job. Milon starts talking to Raihan about various Talbahana and Chit Batfari. Later in 2016, Raihan became a plaintiff and filed a check case in Chapainawabganj court.

He was finally arrested by RAB-5 members from his rented house at 11am on Tuesday.