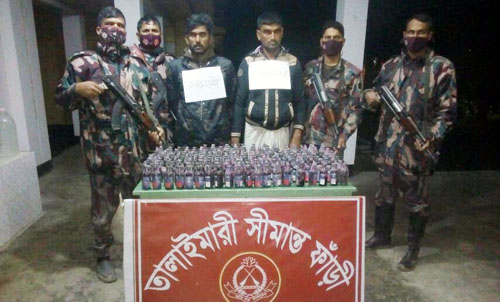 BGB members have arrested two identified drug dealers along with a large quantity of phencidyl at Rajshahi border.

Talaimari BOP’s Naik Signal Mohammad Noor Alam and allied forces arrested them on Friday (January 6) at around 12:30 pm while they were smuggling phencidyl from India to Bangladesh in a motor boat through Padmanadi in Lataban area under Katakhali police station. At that time 16 bottles of Phensidyl were recovered from them.

He further said that the value of the recovered Phensidyl Caesar is 2 lakh 55 thousand rupees. The arrested persons are identified as drug traffickers. Lieutenant Colonel Sabbir Ahmed also said that they have been involved in drug trade for a long time.