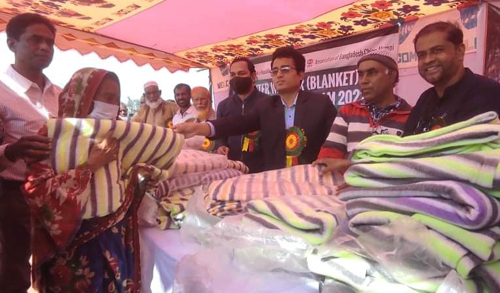 Blankets were distributed among poor and helpless cold hit people at char areas under Bhurungamari upazila in Kurigram district at around 11am on Friday.

Some 1000 blankets were distributed among the helpless, river erosion hit and cold hit people at Char areas under Saljhor and Kazear Char under Bhurungamari upazila in the district. An organization named Impol Impact Intuitive, assistance by Embassy of the People’s Republic of China in Bangladesh and Association of Bangladesh-China Almunai distribution the blankets formally.

Bhurungamari upazila Nirbahi Officer Dipok Kumar Dev Sharma was present as the chief guest while Staff Reporter of the Daily Prothom Khabor Enamul Haque was presided in the function.